This is a guideline from the BSH on investigating and managing a raised ferritin. It was published in 2018. I'm going to summarise it, but there is a lot more in the guideline, which would be useful to refer to if you have a puzzling patient.

What normal variations are there in ferritin levels?

I was not aware of any of the following, so thought it worth noting.

What are the causes of raised ferritin?

The list is quite long and includes lots of rare diseases. It is worth noting that in primary care, the diagnosis is not normally going to be haemochromatosis.

In general the causes can be split into 3 groups:

The most common causes in primary care are:

What other tests should we do if we find a raised ferritin?

What should we do with all these results?

There is a very useful flow chart in the guideline. I have added this below: 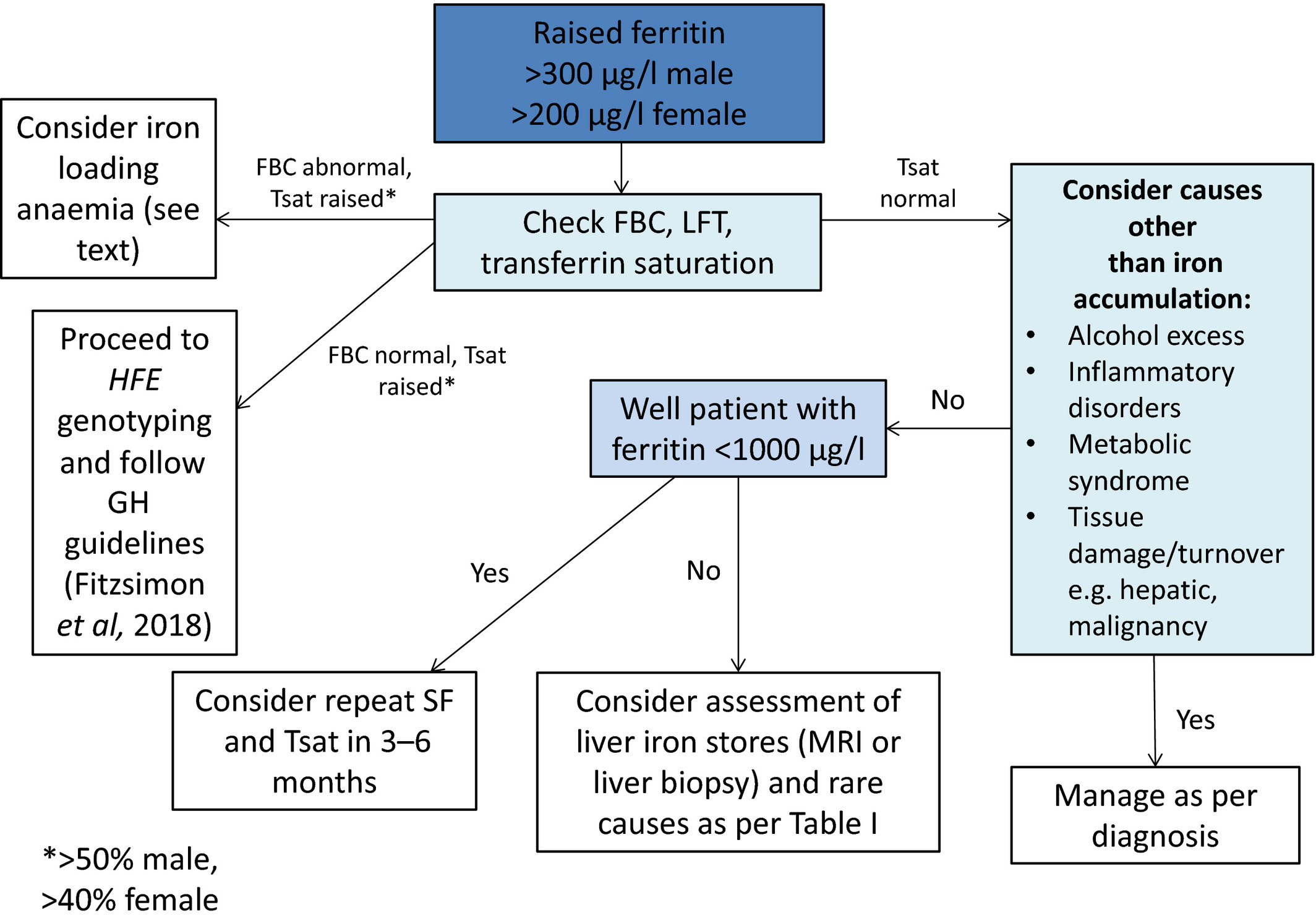 It is useful to note that they advise that in a well patient, with normal transferrin saturation and a stably raised ferritin of < 1000 micrograms/L, it is OK to watch and wait for 3-6m. In that time, lifestyle interventions should be tried. These should include reducing alcohol, losing weight, better diabetes control and better hypertension control. These should reduce the ferritin in weeks or months if they are the culprit.

Alcohol excess and fatty liver will often cause a fluctuating raised level of ferritin.

If the raised level is unexplained, persistent or > 1000 micrograms / L, then patients need referring to hepatology.

When should we be worrying about haemochromatosis?

This guideline advises that the following features make a diagnosis of haemochromatosis more likely:

However, any patient with a raised ferritin, normal FBC and raised transferrin saturation should be referred to hepatology.

I’m a salaried GP in Hampshire.

View all posts by: Louise Hudman

Thriving as a GP locum

NASGP's locum handbook. With over 9,000 downloads, over 40 pages on everything you need to thrive as a GP locum. Download Thriving as a GP locum today.

“I am delighted by the way the NASGP has grown and become such a good support group for locums and other non-principals. I have really appreciated the mailings and enjoyed attending one conference. Please keep up the good work!”

I have decided to retire from medicine, and so from the NASGP too. You have my heartfelt thanks for being around, especially for all the useful articles in your journal, and I wish you well for the future.

“My accountant husband said that invoicing on Locumdeck was very impressive. Incredibly easy to use and intuitive – excellent piece of work!”

The info on the website really helped when I started sessional work in April and I’ll recommend you to all my appraisees starting locum/sessional GP life as I think you’re an invaluable resource for sessional GPs.

I regret not having joined earlier!!!

I’ve tried simple templates or hard copies of locum packs before but find they so quickly become out of date. I like the way NASGP [Standardised Practice Information Portal] is easier to navigate and update than these paper-based systems.

I have been a member of the NASGP for about 18 months and find the support and advice invaluable. It was especially helpful when I started locum work; I think I must have spent hours on the website devouring every single article as I was keen to learn all I could before I went solo!

“Thank you for the service you have provided while I have been a member over the last few years. I have found the website and sessional magazine very helpful during my time as a locum.”

I’ve recommended [NASGP invoicing] to my colleague/friend who is also starting out as a locum GP.

The quality and contents of the magazine are superb, and it’s wonderful that GP locums now have a voice and are seen as a vital part of the medical workforce.

[NASGP invoicing] is fairly self-explanatory and having never made/sent an invoice before it’s made my life a lot easier, and made me feel reassured I hadn’t forgotten anything important.

Thanks for all you have done for sessional GPs, keep up the good work!

“I am a newly qualified Sessional GP. I am thankful to you and your team for the splendid work you do for all of us. LocumDeck is the only platform that allows GPs to be in control and I am glad I am a member of NASGP since my Trainee days.”

Thank you for many years of help and support in an increasingly difficult job as a sessional GP in the NHS.

I wanted to share with the group how AMAZINGLY GOOD NASGP LocumDeck is!! It is so good and so intuitive that I am lost for words and utterly filled with glee.

“We’ve worked with the NASGP now for over a decade, and have always been impressed with their commitment to promoting a really productive working relationship between practices and GP locums, with the ultimate aim of making sure patients receive the best care, no matter which GP they see.”

Thank you for all your support over the years.

[NASGP’s LocumDeck] is really less than a minute to invoice and do the pension forms, with everything calculated perfectly.

I have found membership very helpful during my time as a locum and GP and would like to thank you very much.

I must tell you that you have a brilliant team. I find it so convenient to ask for help and it’s always tailored to my needs. Thanks a bunch 🙂

LocumDeck (opens link in new tab, completely free for NASGP members) now includes automated Locum A and B forms for England and Wales.

“…it is so good and so intuitive that I am lost for words and utterly filled with glee.

…it can send an email confirming the sessions that are booked and creates and emails invoices direct to the practice for you. These can contain links to your beautifully laid out ‘credentials’ page with all your relevant documents…and a model contract that is all ready for y…

LocumDeck really is brilliant – I’ve always relied on my own system – never put my faith in any other system – but was genuinely buzzing when I used it yesterday – how easy it was to use and how many other things it does. It will significantly change and improve my invoicing and end of the month!

“I don’t normally do this, but just to say that I thought your article at the front of the latest NASGP magazine, about clinical errors, was really excellent. Great, and very thoughtful, writing. NASGP member.”

I feel strongly that sessional GPs need an organisation solely focussed on representing their interests.

“I started working as a locum GP in January this year and NASGP have been invaluable in helping to co-ordinate my bookings and organise all the administrative aspects of sessional work which can be complex and time consuming. Their client support is outstanding and they have always resolved any queries promptly and personally. They care about the service they provide and I would not hesitate to recommend them to any sessional GPs who want to minimise time spent on administration and focus on pro…